I don't even want to know what kind of search results the title of this post is going to yield. Some lonely guy in Romania is going to be searching for something supremely sketchy and be mighty disappointed when he sees this photo of Shia LeBeouf. 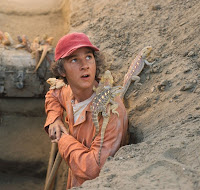 From the movie "Holes." Yeah, I know you get it.

So is the guy searching for any combination of the words "hole" and "the beef."

Well now that I've seen to the business of sentencing my week-old blog to the dregs of the web, I can move on to more important things, like my inability to endure human interaction this past week.The last time I felt like this, I was in my third trimester and and out running Saturday errands when I found myself taking a bit too much joy in keeping an asshat tailgater pinned in behind me and the slow guy next to me. It was at that point I realized that I was a giant sack of crazy and should seriously consider solitary confinement for the duration of my pregnancy.

According to very reliable sources (or Wikipedia), solitary confinement (also known as "the hole") is a "special form of imprisonment in which a prisoner is isolated from any human contact" and is implemented when one is " considered dangerous to oneself or to others." What I hear them saying is that it's quiet, kid-free and involves limited communication with people who piss me off ( Loosely defined as the kind of people who create demand for a One Direction pop-up store, scheduled to open soon at Chinook Centre. I can't even). Is there a waiting list to get into this lockdown mode? Because I'd like to submit my name for consideration.

My indignation was sparked last week when someone asked if I was expecting baby number three. Granted I was wearing an unflattering top and have terrible posture, but let me offer this word of advice: do not ask women this question unless you're sure. Like, really sure. As one friend put it, "Go ahead and politely inquire if a baby's arm is dangling out of there." Later that same morning at Costco, as I waited in line to pay for a bag of coffee that weighed the same as my son at birth, an employee approached to ask if I'd lost my membership card. She held up the card in question and, despite the crappy quality of the thumbnail-size black-and-white in the corner, it took me all of two seconds to identify that a) it was not by card and b) the woman who it DID belong to was at least 10 years older than me. So in the span of two hours I have now been called old AND fat. And people wonder why most days I "joke" about unscrewing the cap on a fresh bottle of wine when the clock strikes noon.

So if I'm indeed "considered danger to others," there should be a caveat somewhere that provides allowance when dealing with the mind-numbing stupidity of others. Unless of course being locked-up means I can take an interrupted nap. In which case, just let me know where to sign on the written confession.