I haven't run a marathon yet. It's on my bucket list, but Mr. T and I have come to an understanding that we'll wait awhile, until our kids are a bit older and more self-sufficient. Half-marathon training is a challenge enough as it is with two little ones, and we want to make sure we have the time and energy to commit to training for 42 kilometers. Both of us have said we'd love to try to run Boston in the future, preferably in the next 10 years. But even if that doesn't happen and we have to wait until we're in our 80s and the qualifying times are more forgiving, both of us want to wear that medal around our necks at some point.

Mr. T has traveled to the area often. One of his former company's home offices was there, and for a period, there was even talk of possible relocation for our family.


Though the word terrorism feels big and ominous and far away, for a multitude of reasons, today's tragic events hit close to home. We are parents and news that an eight-year old boy was one of the victims, and the realization that he was likely there cheering on a loved one, possibly his mom or dad, is almost unbearable.

We have been there at the finish line of races, as both runners and spectators. We know the anticipation that hangs in the air, the excitement of those final steps, whether you're taking them or watching them. We've hugged our family members and reveled in the feeling of pride and accomplishment. It is a place of joy and of celebration.

Being at the Boston Marathon is no accident or stroke of good luck. These runners have spent months, or very likely years, preparing for this day. Their families have too. They may not log the miles themselves, but they offer support and words of encouragement when the task seems insurmountable. 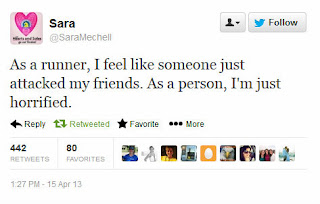 Indeed, it's like reading about a friend, even if you don't know their name or have never spoken a word to each other. Those of us reading about the horror may not have been close enough to feel the explosions, but they rocked us anyway. Because whether we've met face-to-face or not, we wave to each other on our weekend long runs, offer a "Nice work!" to cheer each other up a big hill (or maybe just a thumbs up, depending how much breath we have to spare) and chat nervously, yet excitedly as we await the horn signalling the start of a race. It doesn't matter if we struggle to keep an eight-minute kilometer or cruise easily at a sub-six. We challenge ourselves, push ourselves, test our limits and we discover camaraderie in that. It is a common thread that allows us to relate to one another.

A friend of mine ran the same half-marathon I did last fall. At some point in the final kilometer, her legs gave out on her and she collapsed on the course. Rather than accept help from a medic, she was instead assisted by two other runners who watched her fall and stopped to check on her. Abandoning their own race and possible goals, they hoisted her up, put her arms around their shoulders and helped her to the finish line. This kind of story is not uncommon in the running community.

And so our hearts ache as we watch events unfold that could break even the strongest of spirits. We mourn the loss of innocent lives at an event that shows us the possibilities of strength, endurance and good old-fashioned hard work.

In the coming days and weeks, authorities and officials will look for answers and numerous theories will be posed and debated. But as Newtown and Aurora and New York City showed us, there will not be a satisfactory answer, nor will we ever be able to make sense of it because there is no logic or explanation to madness and depravity. We can only maintain hope that goodness and courage and unity  - all of the things that running and the Boston Marathon embody - will prevail.
Posted by Unknown at 8:25 PM