Do you remember the scene in Dumb & Dumber when Jim Carrey asks Jeff Daniels if he wants to hear the most annoying sound in the world? In the past few weeks, Little Dude has been working on replicating that exact noise and his favourite time to practice falls anytime between the hours of midnight and you've-got-to-be-bloody-kidding-me. Last Saturday morning, I went so far as to promise him high fructose corn syrup and early access to his college fund if he'd just let me sleep for an extra hour.

It's like having my very own pet banshee, if banshees had golden blond curls and the propensity to accidentally pee on their own faces. (Banshees, for the record, are mythical fairies who screamed to warn of an impending death. Irish folklore didn't bother to expound on their ability to sweat, grin, clean or pee, in the event you're ever tempted to misuse the expression).

As if the rude nighttime wake-up calls aren't offensive enough, the week before my half-marathon, he also had a low-grade fever and the trots. Our family, grandparents included, have continually battled every virus and bug to go around this winter. And wouldn't you know it, with a Saturday 9 a.m. start-time scheduled, I began puking on the Thursday at 8 p.m. I spent the better part of the following day trying to rehydrate and deliriously telling myself 21 kilometers wasn't that far and I'd be fine to try it, despite the rumoured challenge of the race. Mr. T and my dad finally talked some sense into me with the reminder that they weren't really in the mood to have to identify my body at the 14k mark and that it'd be a bummer of a Mother's Day weekend if I had a stroke on the course. I was crushed that all the weeks of training and extra hill work wouldn't be put to use just then and resigned myself to the 10k race that Sunday, setting my sights on the Calgary half-marathon, two weeks later instead.

The Calgary half was yesterday. As Mr. T and I debated the merits of a jacket versus arm warmers in the early hours of the morning, my stomach remained calm, devoid even of the usual pre-start line butterflies. Nor surprisingly, I didn't finish with a PR. I didn't even beat my time from the same race - my first half-marathon ever - two years ago. But I was able to run the race with Mr. T and my running partner. After days of solid rain, race day was beautiful, warm and sunny. And after attending a funeral for a beautiful little girl, just six days older than my precious Dude, the day before, I needed to run away from my own anxious thoughts for awhile and clear my head. There is valuable experience to be gained from every race, even if you don't set a new personal record. And if nothing else, you can at least try to consume your race entry's worth of bananas, chips and coffee once you cross the finish line, if that accomplishment isn't enough to satiate you.

Now if only I could convince my kids to just share the Oreos that come with kids' meals and cash included with birthday cards, rather than festering germs and explosive diarrhea. 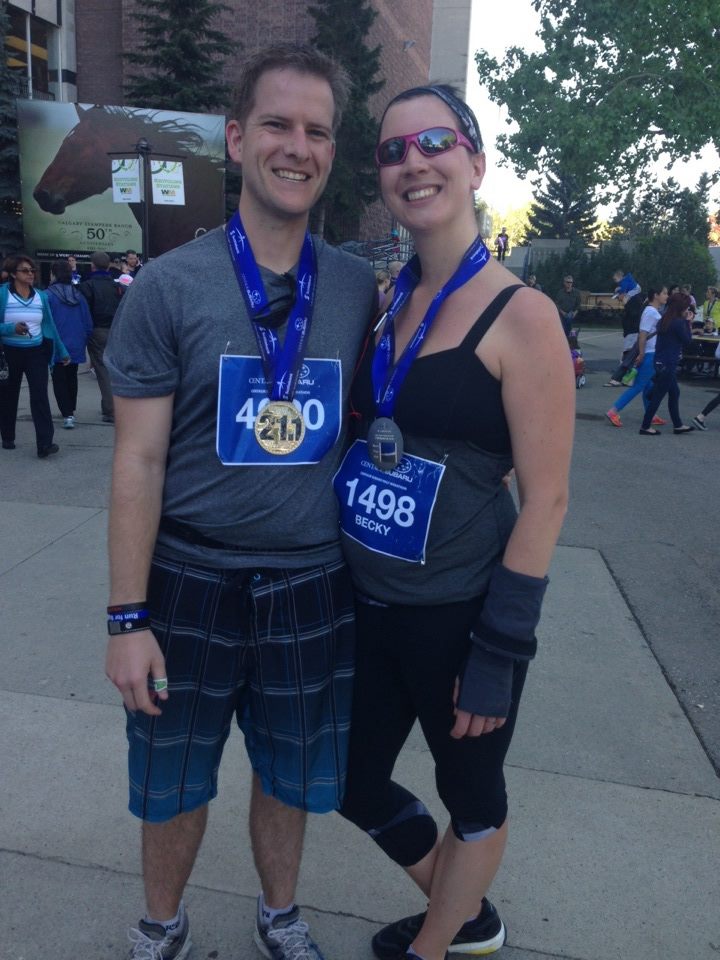