I don't know Lisa Gibson. I don't know where she is tonight.  I don't know her story, her background, what her experience as a mom has been like. If she's alive, I don't know how she'll ever come to terms with the tragedy that befell her two children earlier today.

The Winnipeg mother of two has been missing since around the time police came to check up on the family and found her two-year old daughter and three-month old son allegedly drowned in the bathtub. Police are looking for her, looking for answers, looking for a possible explanation that might shed light on how a mother could do the unspeakable to her babies.

It's not a completely foreign story to me. Fourteen years ago, a mother from our community also drowned her two children in a bathtub. At the time, I was seventeen. Her oldest child, a four-year old girl, had been in the junior church I led on occasion. We had known the family for years. Even though I was more than a decade away from becoming a mother myself, the tragedy rocked me. The loss of innocence, the senselessness was incomprehensible.

Now I have two babies of my own. I love them so much that sometimes the feeling overwhelms me and leaves me short of breath. In the moments of a smile, a giggle or a sudden, unexpected outburst of affection, I can't imagine a love greater or stronger than the one that binds me to my children. 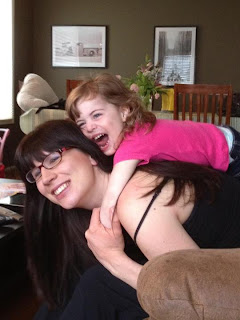 But while I don't know Lisa Gibson or much about her beyond the public photos of her Facebook page, I know the beginning of the journey that can lead to where no mother ever comprehends she could possibly go.

I have never hurt my children or had the legitimate thought of intentionally putting their lives in jeopardy. However, when Shooter was three months old - the same age as Gibson's baby - I was suddenly rocked with postpartum anxiety that slammed into me so hard, I felt like I could hardly catch my breath.

When we were in Hawaii earlier this year, I had a boogie board out in the shallow part of the ocean. I'm not a strong swimmer, so I figured I was safe in these waist-high waters. I saw a wave coming, got my board in place but mistimed my dive. I was knocked underneath hard enough that the side of my head hit the ocean floor and I was sent spinning and kicking upwards, trying to find the surface It's a horrible cliche, but fitting metaphor for how fast, how unexpectedly, this illness crept up on me.

I've always been something of a worrier. That feeling intensified as I grew older, but never as much as it did after I gave birth. I remember coming home from the hospital and being terrified that all the usual things that were part of my normal routine could suddenly put my new baby at risk. The dishes left on the coffee table could be knocked off and hit her on the head while she slept in her bouncy chair. The knife I used to chop vegetables could fly from my grasp and hurt her as she cooed in that same bouncy chair as I made dinner. For the first few weeks of my daughter's life, I was convinced every mundane thing I did was a constant threat to her well-being. Eventually I relaxed a bit. I got used to having her around, maybe even a bit comfortable.

And then that three-month milestone hit. I'd found my stride as a new parent. I was sure from my vantage point, I could see any waves coming and the water was shallow enough to omit any real threat or danger. Our family was driving home from celebrating the new year in the mountains when I had my first panic attack. It had been a lovely season of celebration and cheer and Shooter's first giggles, which we'd managed to catch on video. Mr. T had to go back to work after being home with us for a couple of weeks over the holidays and I had nothing to look forward to now that Christmas was over, except for a few more months of dreary winter.

Up until that point, I thought I was free and clear from the risk of postpartum woes. I had weathered the storm of the first few weeks after birth and was convinced I had made it to the happy, easygoing side of motherhood. It was the fact that I wasn't expecting it that made it that much harder.

It was the memory of that family friend and the horrific events of that summer afternoon that made me seek help right away. I was fully aware that mental illness had been the driving factor of that mother and I hoped that full transparency would be what kept me from reaching a point of desperation, and of no return.

There were some terrible days on that initial journey. We were in a phase where Mr. T was required to frequently travel for work. I am blessed to have family who live close by and were more than willing to be here and help out in his absence. But even still, sometimes I felt my patience and love for my child being pushed to their limits. There were occasions where she missed her daddy and she didn't want to go to sleep and would cry, and then I would scream at her in frustration, be a little rougher than I intended to be and dissolve into a sobbing heap once I finally got her into bed. In those moments, I was never tempted to actually hurt my precious baby. But I also recognized I wasn't in control either - of the situation or my emotions. I knew I had the next day to get it right, but in those moments, the feeling of failure felt like a 50-pound weight on my shoulders and I cried accordingly.

Eventually, there would be light and happiness again. I started seeing a psychologist when I first recognized the symptoms. I took up running and for an activity that makes so many people feel like death, it made me come alive and feel somewhat in control again. At the very least, it gave me 30 minutes to myself a few times a week where I could pound out my frustration and insecurities and irrational fears. It took several months, but I fought through the worst of the storm.My anxiety didn't disappear, but eventually the clouds parted and I once again had more good days than bad. I learned a lot about myself in that period. About my triggers, my limits, about how to ask for help. I also had a glimpse of how much you could love a child, but be capable of doing something so monstrous.

It was learning from that experience that allowed me to seek help so readily when those feelings of panic began to resurface somewhere between the sixth and seventh month of my pregnancy with Little Dude. This time, I wasn't so quick to fight the idea of medication. I knew that the feelings, the tears, the panic, would be much more intense when I added a baby and hormones and severe sleep deprivation. I didn't want to think of what I could be capable of if I didn't at least try to get a handle on the fear.

There have been many things that have saved my life, and maybe the lives of those I love the most. I am so fortunate to have people who love me unconditionally and who don't judge me on my ugliest days. I keep expecting that when I admit the worst of my thoughts, these people will gasp in horror, declare me an unfit parent/daughter/sister/friend and abandon me. But they don't. Maybe some of it had something to do with my experience as a naive 17-year old. I knew nothing of the love for one's own child, but I saw close-up, how mental illness can destroy even the most lovely, the most unsuspecting and unsuspected.

It's that realization that keeps me from jumping to any judgement about Lisa Gibson. I don't know her personal story and I firmly believe that she should be held accountable in whatever means are deemed best for her for whatever she may have done. But I do see how a loving wife and a devoted mother can suddenly change into a person she doesn't recognize, a change she has no control over. I know firsthand that sick feeling that you just aren't doing a good enough job for these beautiful creatures you helped bring into the world. I know how soul-crushing it is to be trying so hard and doing everything in your power to make these little people happy only to have them express nothing but frustration and anger back at you. I know what it feels like to be so helpless to make them happy and lack the power make it all okay for them, and to repeatedly feel like it's never enough, will never be enough.

I pray that as family, friends and neighbours come forward and tell their stories about this family, that complete strangers will keep their unhelpful commentary to themselves. No, not everyone can imagine what it's like to feel this way. That's okay. I can't imagine how somebody would voluntarily spend money on a One Direction album. There are all kinds of people out there and we can't always relate to others and their experiences, or determine why they are the way they are. Or why they have such terrible taste in music.

What I do hope is that other parents hear Lisa's story, read the details and wonder to themselves "Could I? Could someone I know?" Let me reiterate something: the mothers who commit these horrendous acts love their children. They love them as much as you love yours. The very scientific way in which their brains function does not reflect a lack of love or affection for their children. It's so easy to fall into the "I would never" trap. And you're right - in your normal state-of-mind, unaffected by hormones and no sleep, you would never. If you had asked me 10 or 15 years ago if I would ever be capable of doing something so unimaginable, I would have fiercely denied it and been offended you could even consider such a thing.

I know better now. I know that the perfect storm of emotions and circumstances and misfiring neurons can turn somebody into a person they don't recognize. I know that it's so easy to slip from "I would never" into "I can't believe I..."

I know Lisa Gibson because sometimes I wonder, had my situation been different, could I have been her?
Posted by Unknown at 11:50 PM