Stop referring to my childhood as "retro"

In two weeks, Shooter will be done her first day at preschool and we'll have reached yet another milestone that I'll pretend I'm going to remember to write in her baby book. And I will; just not for another nine months, when my memory is a bit fuzzy on the details and I have to fill in some of the gaps with what I'm pretty sure happened.

This realization comes on the heels of a conversation with a friend who recently felt like her "o" face  was on display. That's right - she entered into the territory of a large population of bearded, bespectacled 20-somethings with nothing else to do on a weeknight but rock out at a concert and she felt...oh it hurts to say it: old.

Another friend spent less than 15 minutes in Forever 21, and felt Terminally 34 (though in the interest of full disclosure, I would probably wear shark leggings in the right situation).

Thus concludes a series of unfortunate events that reminds me the clock of my youth is now dragging its hand around to the twelve and the bell will surely toll soon enough. My good friend D is five years to the day younger than me. I have rounded the corner of 30 and can barely make it out in the distance behind me, while she still gets to enjoy another few years in her 20s. I will occasionally joke with our friend A, who is the same age as me, and one of us will make a pop culture reference that flies right over D's perky head. In that moment it occurs to us that she will never remember the time Samantha Micelli came home from a date with a hickey and pretended to do a new dance with her neck on her shoulder to hide it from Tony. She thinks Spinal Tap is an unfortunate medical procedure to detect meningitis, while I attended their acoustic reunion tour four years ago.

There was a time before I had my own kids, when my mom lamented that she should have saved some of her old clothes because the trends had come full circle and I could have used them. I laughed awkwardly while adjusting my fringed poncho and cringed at the thought of paisley pantsuits. This was before I found myself on the other side of the neon leg warmers I bought last winter for the sole purpose of wearing to brighten up a dreary winter day. 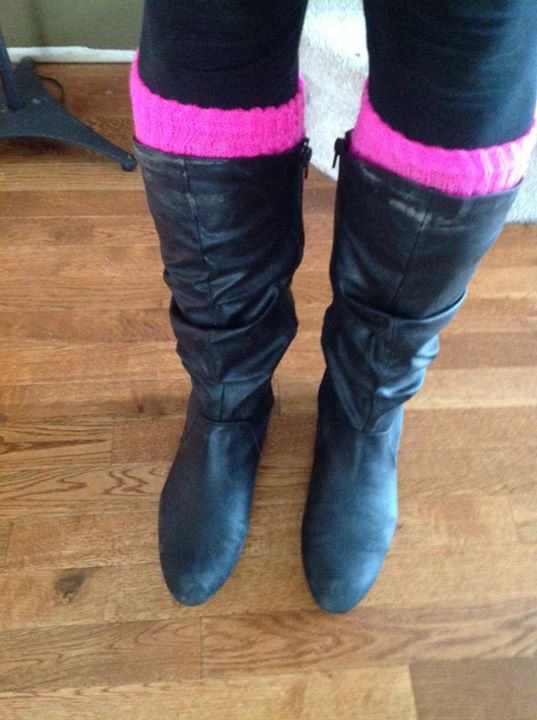 I am saving them in a box for Shooter, stained with the tears of my fading youth and a few drops of the Shiraz I opened when I realized this, along with the fact that she may also one day face a brief bout with shoulder pads.
Posted by Unknown at 12:58 AM 3 comments: