Friday would never do this to me

Here we are, 13 days into 2014. and I'd love to say I'm doing something inspiring and resolution-worthy tonight. Like running 12 km or organizing our pantry (the idea of which has really just become a bad joke around here). But Mr. T and I are parked on the couch watching Brew Dogs.

More accurately, he is watching Brew Dogs and I am tuning in randomly, wondering why the hosts are visiting an old folks home and trying to convert the elderly into craft beer drinkers. Isn't that called coercion, and essentially one step away from getting them to sign over their life savings?

He says potato, I say unlawful.

Tonight, I'm couch-bound because I'm grumpy. And I'm grumpy because it's Monday.

I always thought Monday unfairly had a bad reputation, but lately, she's been fighting for her Most Hated title.

In the past 15 hours since I reluctantly untangled myself from our duvet and set two feet on the floor, the following has happened:

* Little Dude teethed on a pack of Via instant vanilla latte in Starbucks before I could stop him.

* A freak blizzard prevented me from making the drive to Costco, as planned.

* The wind and snow caused Shooter to slip and fall while walking to the car at preschool pick-up and sparked a meltdown that would terrify Gordon Ramsay.

* Little Dude removed his boots and socks on the drive home, and while I was stuffing his feet back into them, he swung one newly booted foot up and caught me in the mouth.

* Shooter was still really pissed about her wet pant legs and thought the people nine houses down should hear her discontent.

* My Yak Trax are broken and I haven't replaced them yet, so safely running on unshoveled sidewalks wasn't an option for stress relief.

**I have lived in Calgary for 32 years and I have not acclimatized to our weather. I'm actually a Hawaiian woman named Ailani trapped in a cranky Canadian's body. I also really enjoy Mei Tais. All the signs add up. 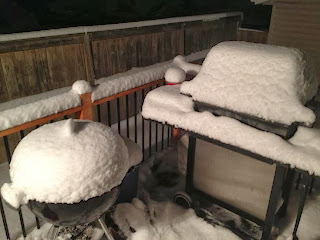 On a somewhat related note, a mouse committed suicide by climbing into the barbecue on the right a few weeks ago. I think we can safely assume the winter got to him too.

And suddenly I can no longer remember the reason I'm so angry. Because it's winter in Canada or because it's Monday?

Whatever. I'm positive that if this were Thursday, it would have been sunny all day, the sidewalks would be clear, and I would not have a fat lip right now.

Come on Tuesday. You have All Day Happy Hour written all over you.