About those personal avalanches (and my ability to milk a metaphor)

I really try to avoid Vaguebook-ing (the art of posting something ambiguous to invite questions and concern), but I should know by now that as a chronic over-sharer, posting a brief, unexplained snippet from my life might cause that reaction. 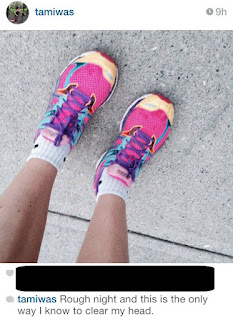 What I was mostly trying to convey was that often times, I can outrun my demons for awhile (they're surprisingly slow bastards). Yet within a couple hours, I had a number of texts and messages checking in on me, wanting to make sure I was alright. I generally try to be open and authentic with my struggles, instead of just alluding to them. There's just less isolation when you're willing to share that. So I cringed at the thought that people might think I was seeking attention without offering details.

And then, when I'd had a minute to be reasonable, I had to tell those negative voices in my head to shut it and do something productive, like clean my floors (seriously, if they're going to hang around, they could at least make themselves useful. And my floors are disgusting).

Yes, last night was a bit rough. It wasn't the worst I've ever experienced, and yet it wasn't just one thing either. As anyone with anxiety can tell you, often one thing is usually dog-piled on by many other things. And then a couple more for good measure, just to make sure you know that you're getting all the things wrong, all the time. The briefest whisper of unsettledness can trigger an emotional avalanche that gains momentum at an alarming speed, so that one thing looks like one, big uncontrollable disaster.

But for once, this actually isn't about me. These piles are not a new or foreign thing.

No, this is a shout out to the rescue crew, the ones who know where to look for you, and who grab their shovels and start digging to help you find air. A good friend pointed out that most people probably just assumed my post was referring to a rough night with my kids or something else rather inconsequential. That's probably a good thing. If everyone suddenly rushed to my doorstep with pickaxes in-hand, it might alarm the children (yet probably wouldn't actually surprise the neighbours that much We are most definitely that house on the block).

But others called my name, reached out, grabbed my hand and pulled, just in case I was stuck and couldn't get out on my own (and do so time and time again).

I am really fortunate to have these people and this friends, is exactly why you need yours too. That doesn't mean you have to find them by broadcasting every emotion, feeling and observation on the internet (unless you also really want unrelated email pitches, like the once-in-a-lifetime opportunity to blog about quality 925 silver products. And who wouldn't?). It does, however, mean allowing vulnerability and openness with a trusted few who know to check in if they have the slightest sense you might be buried.

Find these people and be there for each other when the snow starts to fly down the hill. Jump into the debris with them and dig with your hands if the situation requires it. No special tools necessary, just the ability to show up when they hear the distinct sound of the mountain rumbling.

Also, try to make at least one friend who won't cringe at your floors if they do break down your door.
Posted by Unknown at 2:58 PM 1 comment: